It was a 29 hour flight to get to New Zealand. We stopped in Singapore and saw butterflies in the butterfly garden. Then we had a quick stop in Brisbane. Finally we landed in Christchurch. Grandma and Grandpa picked us up. We were really tired.

In Christchurch we went to a cool cafe where the food came from the kitchen to your table through pipes on the ceiling. When it was close a bell would ding. Then you opened the pipe and took out a cylinder, and in the cylinder was your food.  I had mini hotdogs and chips – but the chips were curly! Your food had your name on it, so you knew it was yours!

We also saw our cousins, Clementine and Molly. We had a BBQ at their house, and played with lots of lego. We also went swimming at Corsair Bay. Clementine jumped off a jetty into the water. It was awesome, but I would be too scared. Molly collected lots of shells and crabs and sea snails. Clementine and I made a little bath tub on the beach and the sun warmed up the water.

We stayed two nights with our friend Nigel.  We got to collect the chicken eggs. He lives on a deer farm.

We left Christchurch and drove to St. Arnaud along the Rainbow Road.  It was very dusty and bumpy.  Daddy went fishing in Lake Tennyson. Vivi and I played in the water. 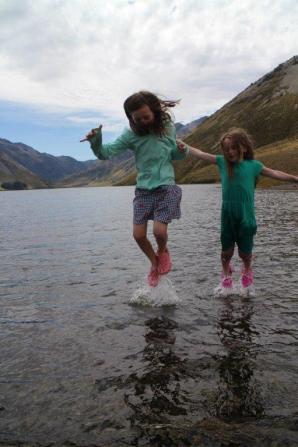 One day we all tramped around Lake Rotoiti and stayed the night at a place called Coldwater Hut. We saw lots of birds, such as fantails, tui and bellbirds.  We also saw a bush robin. There were eels under the jetty. The walk was nice but Vivi got stung by a bumblebee on her ankle. Then I got stung on my shoulder by a wasp. It hurt a lot. We had yummy nachos for dinner. The next day we walked out the other side of the lake. 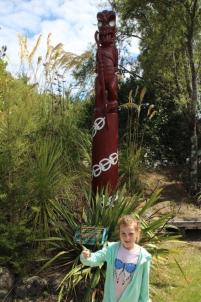 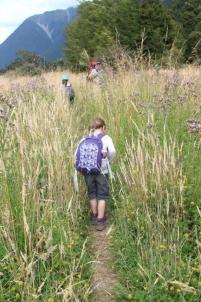 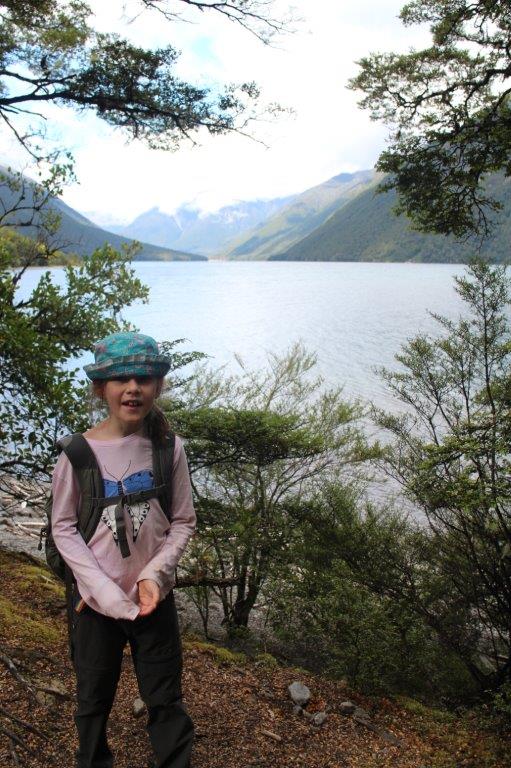 In St. Arnaud, Aunty Cat came to visit. It was so hot we went swimming in the lake. We found some rocks which were painted. They were painted white and had a coulour written on them in English and in Maori. Aunty Cat had some special pens so we got some new rocks and painted them too.  Then we hid them on a little track. 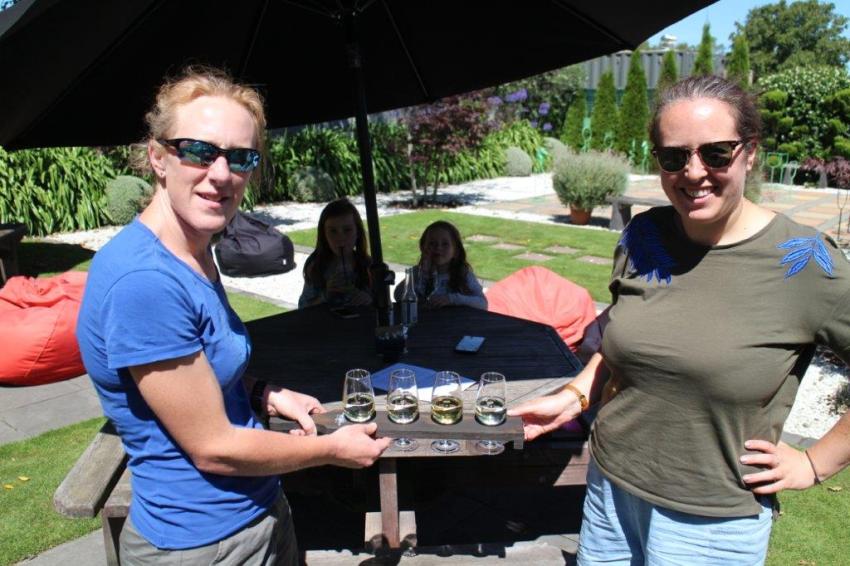 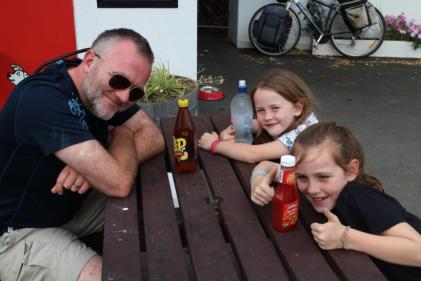 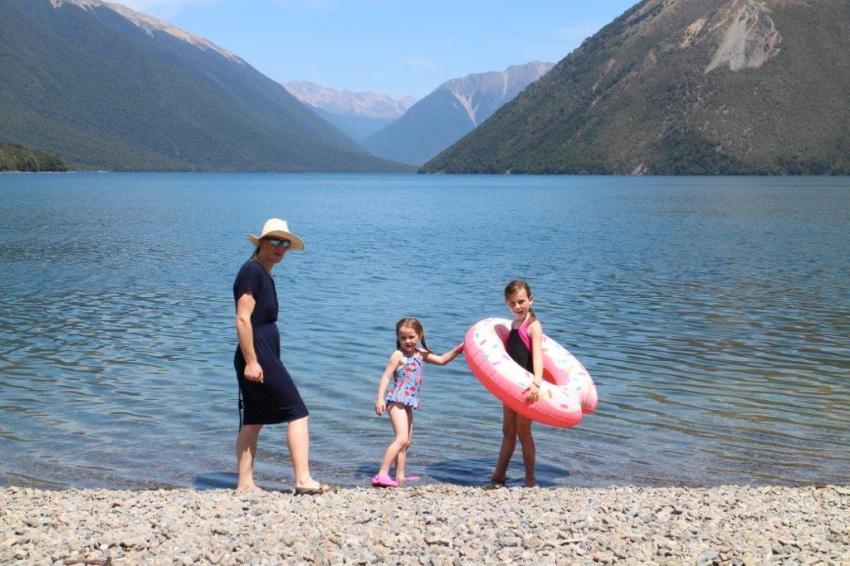 Grandma and Grandpa took us to a beach near Nelson. The beach was beautiful. It had completely yellow sand and the sea was turquoise. There were lots of shells and Grandpa helped me make a collection.  Some of the shells were curled like unicorn horns, and some were blue mussel shells. We even found live crabs. We went swimming and I hung on everyone like a limpet. 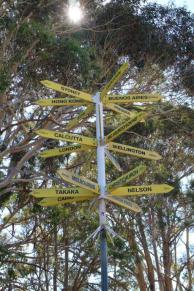 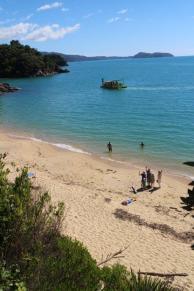 Daddy took me fishing at a salmon pond, and I caught a fish. It was delicious! 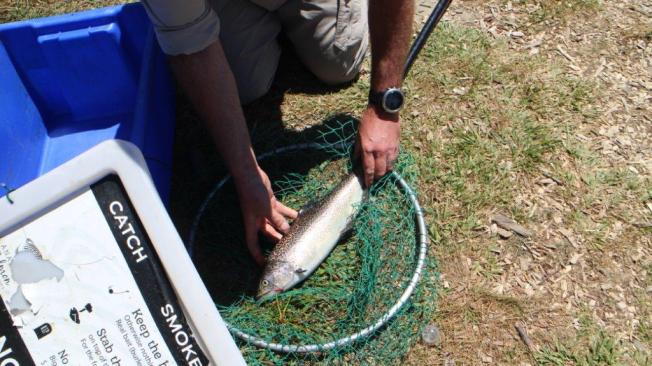 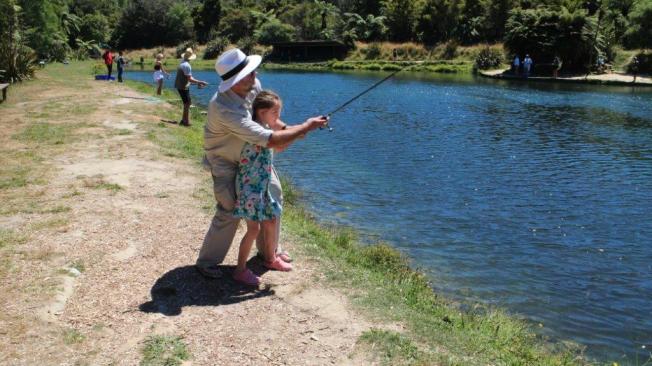 We went back to Christchurch and stayed with lots of different people. We stayed with our friend, Karla. She had a really nice massaging chair that squished your feet and a bump that went up and down your back.

Then we drove to Invercargill to stay with Granny. We went swimming at Splash Palace. We saw tuatara’s, that are like lizards. We found some more painted rocks in Queen’s Park. We also painted more rocks and hid them. 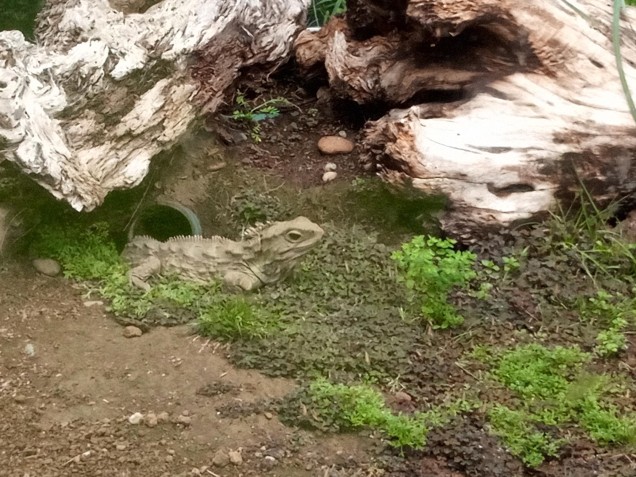 Our other cousins, Arleigha and Caylee came to visit and we played with the Sylvanian Families. It was a lot of fun. My favourite Sylvanian house is the windmill. Aunty Cat and Uncle Stephen were there too. Aunty Cat did park run with me and Vivi. It was very wet.

New Zealand was amazing, it is really pretty.  The best bit was playing with all our cousins.  Our next adventure will be when we are in Africa!