Today we were in Krakow, Poland. First we went to Schindler’s Factory. He was a German man in world war 2, that saved his Jewish workers from being sent to a concentration camp. The museum showed how Poland was invaded by Germany and the Soviet Union. The Nazis made lots of rules and put all the Jewish people in a ghetto, sometimes with 4 families in one room. If you didn’t agree with the rules then you got shot.  Most of the people in the ghetto went to Auschwitz and were killed. Schindler’s factory made pots and plates.  The museum was very good but very sad too.

After that we went into the Krakow town centre. There was a marathon on, but mummy didn’t know, so she missed out. We went to the town square and had a very big icecream. There was a band in the square and marching girls. There was also a bugle call from the church. 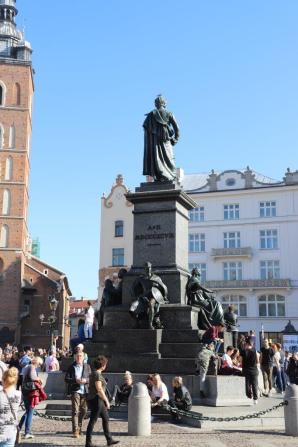 Then we went to Wawel castle. It was very big, we went round the state rooms. There was some art and lots of tapestries of Noah’s Ark.